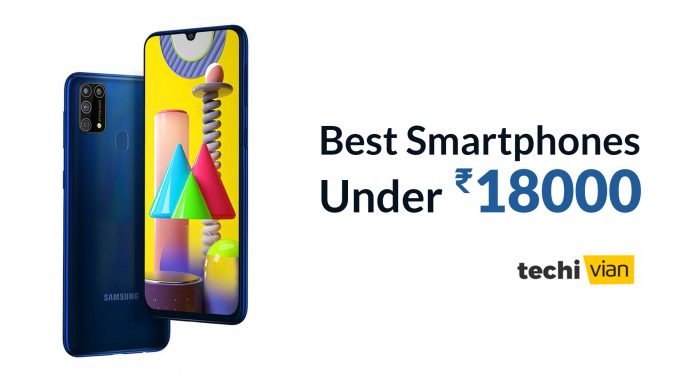 Looking for the best phones under Rs 18,000? We’ve compiled a list of best mobile phones under Rs 18,000 for 2020 in India below. We’ve put together all the good phones available in this budget from different manufacturers. All of these phones support 4G LTA on Airtel, Vodafone, and other networks.

Samsung has always been a winner for budget range smartphones with livid displays. The Samsung Galaxy M31 comes with a decent 6.4 inch full HD screen with a great 2340 x 1080 pixel resolution and a 404 PPI pixel density that give a brilliant picture clarity

The phone has a quad-camera set up with 64 MP primary camera and supported by 8 MP, 5 MP and 5 MP rear cameras as well. As for the front, we have a 32 MP Large camera.

It runs on the very latest Android 10 or the Android Q Operating system with a dual-processing chip. One is a 2.3 GHz chip and the other is a 1.7 GHz Exynos 9611 Octa-Core processor, proprietary to Samsung (Cortex A73 and Cortex A53 respectively)

To support this, the phone has a Large 6 GB RAM and is available in 64 GB and 128 GB variants and either of them is expandable to 512 GB externally.

It has a brilliant feel to the hand and even the battery is impressive. It packs a punch with the 6,000 mAH lithium-ion battery. Supporting it is the 15 Watt fast charging Type C port.

With such mega performance, the M31 comes with a 1-year manufacturer’s warranty from the date of purchase and 6 months on the accessories.

Redmi’s line of Note series has been more than the Samsung Note series. The Note 8 Pro by Redmi packs not only large RAM but also a sleek design and a fast processor.

Starting off with the phone’s build, the mobile has a compact design (not sleek) and has a good 6.53 inches large dot notch screen with a neat 2340 x 1080 pixel resolution. The mobile has a 2.5 D curvature glass for aesthetics.

As for the operating system, the device runs on the Android v9 Pie and to support this, the phone has a 2.05 GHz MediaTek Helio G90T Octacore processor. This processor is run on the spacious 6 GB RAM. The phone is available in 64 GB and 128 GB internal memory variants which can be expanded to 512 GB.

With a decent 4,500 mAH battery, the device comes with an 18 Watts fast Type C charger. It has a one year manufacturer’s warranty with 6 months of warranty on the accessories.

Both design wise and performance-wise, the Realme 5 Pro comes in fast for a direct competition to the Redmi Note 8 Pro but at a higher RAM size.

For its size, the phone has a 6.3 inches large Full HD screen with a great resolution of 1080 x 2340 pixels and a 409 PPI pixel density. This gives you a brilliant and livid screen experience.

Coming to the RAM, the phone has a large 8 GB RAM and a spacious 128 GB internal memory that can be expanded to 256 GB externally. The RAM runs a powerful 2.3 GHz Qualcomm Snapdragon SDM712 Octacore processor and has an Adreno 616 graphics card. Play games and do much more.

Now switching to the camera aspects, the Realme 5 Pro has a great Quad Camera set up with the primary camera having a 48 MP resolution. Following that, the other rear cameras are of 8 MP, 2 MP and 2 MP resolution respectively. As for the front, it has a decent 16 MP camera.

Operating on the Android Pie 9.0, the phone has a decent 4035 mAH lithium-ion battery. It also comes with a fast charger of Type C. The device has a 1-year manufacturer’s warranty whereas the accessories have 6 months warranty. 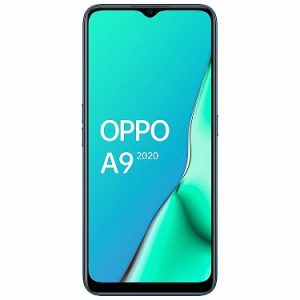 Oppo’s A92020 is a budget smartphone that packs not just a Large RAM but also heavy battery life and performance as well.

Starting off with the camera profile, the A9 has a Quad camera set up with the primary camera is 48 MP and the supporting cameras having a lens of 8 MP, 2 MP and 2 MP respectively. Anti-shake and stable, the phone has a front camera of 16 MP AI resolution.

The device has a 6.5 inches large size but a relatively smaller resolution of 1600 x 720 pixels. But it does have a strong corning Gorilla 3+ screen.

Now to the performance, the device runs on Oppo’s Color OS 6.1 Operating System based on the Android v9. This is supported by a 2.0GHz SM6125 Qualcomm Snapdragon 665 octa-core processor.

It also has the Adreno 610 GPU for graphics. The phone is available in 4 GB and 8GB RAM variants with each one having 128GB internal memory expandable to 256 GB.

For its battery, the phone has a monstrous 5,000 mAH lithium polymer battery that lets the mobile act as a portable power bank too. Just plug in another phone to charge it as well.

With Dolby Atmos sound and surround stereo, the phone comes with a 1-year manufacturer’s warranty whereas the accessories have 6 months warranty. 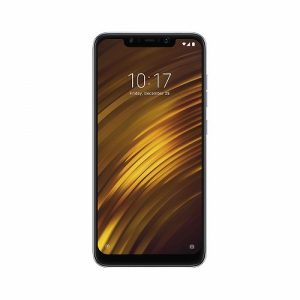 Poco has been Xiaomi’s best selling offshoot brand since Redmi. The Poco F1 is Xiaomi’s budget variant for the Notch Display with high performance and large RAM.

The device runs on the Android v8 Oreo operating system. Supporting this is the powerful 2.8 GHz Qualcomm Snapdragon 845 octa-core processor. The processor has a unique 10 nm architecture 8xKyro cores designed for POCO F1.
Coming to the storage, the phone is available in 6 GB and 8 GB variants of RAM size. It has a 128 GB internal memory which can be expanded to 256 GB externally.

Camera-wise, the phone is not a big brainer as it has a simple AI Dual Camera of 12 MP and 5 MP each. The front camera, on the other hand, has a good 20 MP resolution.

It has a decent 4,000 mAH lithium-ion battery that supports 18 Watts of Fast charging and Quick Charge 3.0 technology. It comes with the same standard 1-year manufacturer’s warranty on the mobile and 6 months warranty on the accessories.

The Vivo Z1X is Vivo’s budget launch with a competitive front facing, on screen fingerprint. Built for gaming and photographers, the phone comes with a modest pricing but packs a powerful punch of performance and storage.

Starting off with the battery, the phone has a sleek design and an impressive colour scheme to it. With a slim shape, the phone gives you a decent 6.38 inches large screen with Full HD Super AMOLED Display.

Talking about the camera, the phone holds a tri camera set up with 48 MP main camera, 8 MP Super wide-angle lens and a 2 MP Depth lens camera. For the front, the phone has a super 32 MP camera.

To support this, the phone is available in 6 GB and 8 GB RAM varieties in 64 GB and 128 GB storage capacity expandable to 256 GB externally.

With a decent 4,500 mAH lithium-ion battery, the phone supports Type C Fast charging technology and holds its own. With one year manufacturer’s warranty on the phone, you also have 6 months of warranty on the accessories.

With a stellar color scheme and Fast processor, the real winner of the Realme XT is its front mounted fingerprint sensor and the high-quality quad camera set up.

Within this quad-camera set up, you will have a 64 MP Main camera whereas the remaining three cameras have 8 MP, 2 MP and 2 MP resolution each. For the front camera, you have a decent 16 MP lens.

For its screen, the phone has a good 6.4 inches large Super AMOLED screen with a 1080 X 2340 pixels full HD resolution and a great 402 PPI pixel density.

Running this phone is the 2.3 GHz Qualcomm SDM712 Snapdragon 712 octa core processor. The processor runs the latest Android Pie v 9 which can be upgraded to Android 10.

The phone is available in 4 GB, 6 GB and 8 GB RAM variants with internal storage ranging from 64 GB and 128 GB which can be expanded to 256 GB externally.

It comes with a decent triple camera set up of the main camera having a 48 MP primary camera whereas the rest of the cameras have 8 MP and 5 MP resolution. The front camera has a 32 MP resolution.

With a 6.4 inch large screen, the Galaxy A50s comes with the signature Samsung Super AMOLED display of Full HD Resolution of 2340 x 1080 pixels.

Operating on the Android v9 Pie (upgradable to Android 10Q), the phone runs on the Samsung’s proprietary Exynos 9611 octa-core processor with 2.3 GHz and 1.7 GHz chipsets

As mentioned before, the device is available in both 4 GB and 6 GB variants with the 4 GB variant coming at affordable pricing. Either of the versions has a 64 GB or 128 GB internal memory that can be expandable to 512 GB externally.

For the battery, the phone has a decent 4,000 mAH lithium-ion battery with Type C 1.0 (Reversible USB) port that supports 15 Watts fast charge. The phone has a 1-year brand warranty whereas the accessories have 6 months warranty coverage.